“Nothing in life is to be feared, it is only to be understood. Now is the time to understand more so that we may fear less.” Marie Curie (1867-1934)

10 years ago, I was so terrified of dogs that I rarely visited friends who had them. Then this little one came home. Skylar weighed less than a pound. She’d been taken from her mother too soon so I had to feed her with a dropper around the clock. We had high hopes that she would be a companion for our children who begged us to get her. Within a few weeks, however, she became my sole responsibility.

Having never owned a dog, I didn’t relish the task. My ignorance was boundless but she was patient with me. The first time I took her for a walk, I put an old cat leash around her neck and almost strangled her. When I dropped a sock out of the laundry basket and she brought it back to me, I thought she had super powers. “Look what my puppy did!” I bragged on Facebook. “It’s called fetch,” my friends replied. Apparently every dog could do it.

Skylar watched my hair turn from brown to gray. She transformed from a rascal who chewed up shoes into an obedient pup who thought sunflower sprouts were a treat. She was there through high school then college graduations, followed us into three, different homes in three, different states and hovered at my side through two, major surgeries. She made me laugh over little things like the face she always made when I brushed her teeth. When I played the piano, she howled along as if we were in it together and we were. At night, if I tossed and turned then sighed, astonishingly, she did the same. Yes, she barked at most everything from falling leaves to FedEx trucks. However, after she alerted me to a midnight prowler, I came to respect her every growl.

I often marvel how I ever managed to live so long before finding such a grand companion. Few humans are as unabashed in both their affections and distresses. Skylar was ALL IN for everything and everyone was a potential friend. For several thousand days, I have held her close against my heart and then, last week, as she took her final breath. The house is pin drop quiet now. Our long running conversation has ended but I will never forget how wonderful it was to have. 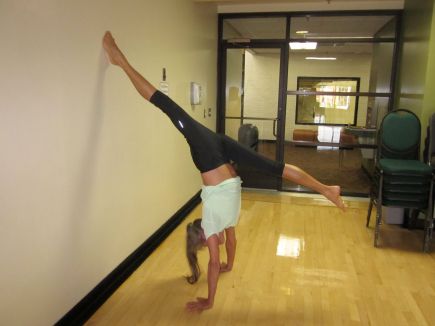 Well go figure. Apparently I have been doing something good for my body and brain for the last 40 years and I didn’t even know it!! I guess you could say it started in my 20’s and I just sort of kept it up.  I do it at home and always when I’m travelling. You name it. Anywhere I find the space, I  simply just do it. Like how it feels. Love how it gives me a different perspective on things.

I’ve done it in SO many hotel rooms your head would spin.  I’ve done it in public, in private, under bright lights, in pitch dark, against fences, bathroom doors in shopping malls and smack on the beach in broad daylight.  What am I talking about??  You guessed it:  handstands.

Now, science says that what I have been doing several times a day for all these years has 5 beneficial results:

Here’s the crazy thing: anyone can do them. It just takes a little practice, a little confidence and a nice strong wall to fly up against. Place your hands about a shoulder’s width apart; aim them about 12 inches from a nice, sturdy wall…and GO FOR IT. The worst that could happen is you chicken out half way up and come back down.

One word of caution: in the thousands and thousands of handstands I have done over the years, only once did I have a disastrous result. As I recall, I was staying in a rundown Motel 6 and there was no room to do one. So, I closed the bathroom door and did a handstand against it. Well, the door didn’t latch tightly.  So as my feet landed on it, I had the lovely sensation of going all the way over and both feet landed smack in the toilet. Thank God I was only 20 at the time.

Give it a try….it just might change your mood AND perspective on things. 🙂

P. S.  Yes, this was me this afternoon at the YMCA. 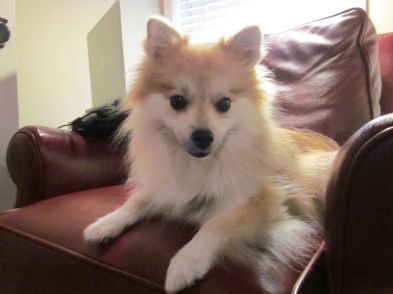 Honestly, I could take a few lessons from my dog. Sure, some are obvious, like:

But others are subtler like, “Wait patiently.” She does. I do not. Nor have I ever been patient, particularly with myself. I am driven forward with an inner angst that has remained un-squelched for 62 years. What good has it done? Not much. Being impatient has cost me time, money and stress, whether in speeding tickets or simply making dumb, impulsive decisions.

You’d think at my age I would know better. You’d think I’d have figured out that of my 62 years, probably 60 of them have been spent WAITING: in the doctor’s office, the post office, the line at the restaurant or the bank.  Everything is a wait as if reality is just out of reach, put on hold by some operator who has yet to connect you.  Waiting…for the check to clear, the light to change, the pot to boil or the shoe to drop.  Probably the ONLY thing I have NOT been impatient for was the birth of my first child. Why? Because I knew exactly how long that wait would be!!!

But Skylar does not need to know such things. She waits patiently for me to get my coffee in the morning before we walk. Then, she waits for me to unload the dishwasher before I feed her. She sits patiently on the couch whenever I leave the house and jumps with excitement and a wag of her tail at my arrival. All her waiting is an act of simple grace and ease.  Not mine. I do not snooze when it suits me or distract myself chasing butterflies (though I probably should do more of both). At day’s end when hunger grips me, I do not merely nibble at a bone to appease the pangs but lunge instead for the icebox.

Patience is not a virtue. It is a necessity as crucial as breathing. Without it, we succumb, sometimes by our own hand.  We humans must work at it, but Skylar?  Just look at her: a thousand words worth waiting for.

“You can’t teach an old dog new tricks.”  If you’re like me, you’ve probably said this so often that you actually believe it.  Funny what we feed our minds with, not to mention our bodies.  Nutritionists say we “are what we eat.”  Yup.  When I was a waitress plowing through my daily diet of cheeseburgers, chocolate milkshakes and fries, I looked exactly like what you’d expect.  The same holds true for our minds.  Although you can’t see into my head and it is very, very dark in the deep recesses of my curvy little cerebellum, I AM what I THINK.  Don’t argue with me because I have been around long enough to know the concrete, crystalline truth of that statement.

When I get up in the morning and think it’s gonna be a lousy day, it is.  When I actually have a lousy day but one teeny good thing happens and I focus on it, it becomes a great day.   They say we only use 10% of our brain.  I think we waste at least half of that thinking stupid, self-defeating thoughts that we eventually come to believe–not because they’re actually true but because we’ve thought them so long.  So, I finally decided at age 50 instead of looking in the mirror and totally freaking out when I beheld all the crow’s-feet & gray hair, I would try a new approach.

You now will find me, often in public restrooms, passing a mirror, looking smack at it and saying out loud:  “Wow! What a gorgeous face.  World you’re lucky to have me one more day!”  Okay, so some people don’t get it but back to the new tricks.  When my grandmother came to live with us she was 82 and well into Alzheimer’s.  She had completely lost the ability to tie her shoelaces so we bought her velcro tennies instead.  However, at 94, she actually figured out how to do it again!  Why?  Because she watched me teach my two year-old over and over.

Now I probably have no right to use the above title as I’ve never owned a dog, taken care of one or lived in a home where a dog existed.  However, right now I am actually thinking about getting a real, live, tail-wagging, precious puppy; one that might teach me some new tricks.  So, please, if you know of a breed that doesn’t jump on you, slobber everywhere, or bark too loudly, just let me know.  (shoelace vignette taken from “Kissing Tomatoes,” http://www.helen-hudson.com.)