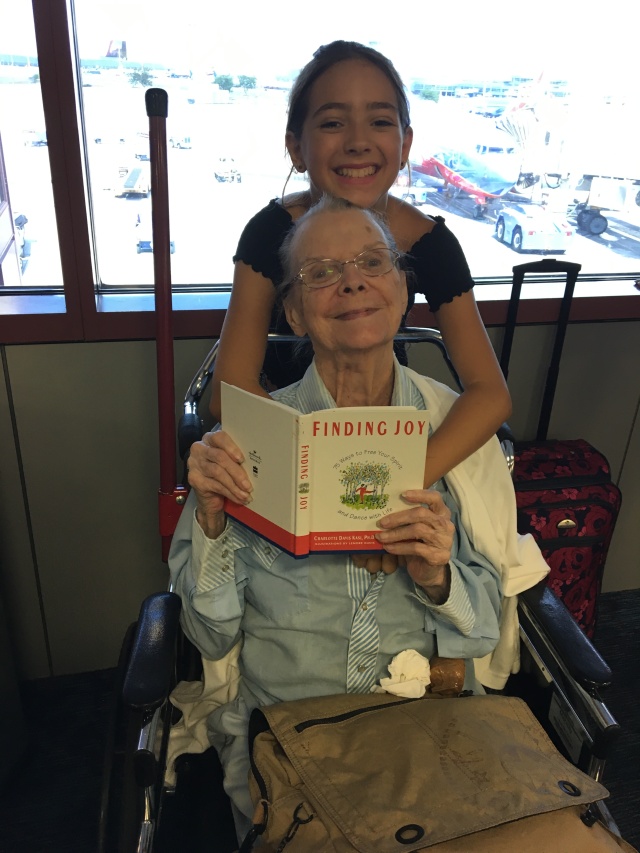 I ran into this fabulous, 94 year-old at the Vegas airport last week. Her 10 year-old, great-granddaughter, Gianna, who clearly adored her, was pushing her in a wheelchair.

“Whatcha readin’?” I asked her.

She grinned and said, “Finding Joy.” Then she thumbed through a few pages, turned the book upside down, shook it and added, “But I can’t find her in here anywhere!” We both cracked up.

Ironically, on the same flight was another woman, also in a wheelchair, who appeared to be at least 10 years younger. She met my attempts to chat with both indifference and a nasty scowl on her face. When it was time to board, she had to wait for an attendant to take her in, so the gate attendant motioned me forward ahead of her. A few moments later as the woman was wheeled towards me in the gangway, she suddenly yelled, “I’m going in there first, you know!”

“No worries,” I said a bit taken aback. “You’re welcome to go first but believe it or not, we’re all going to get there at the same time.” Others laughed but she didn’t find that funny at all.

Just then, my new friend, Elaine came rolling up with Gianna.

“Let’s all sit together!” she said with a big grin.

“I’d love that,” I replied. “Now are we gonna sit in the cabin or do you want a seat on the wing? It does get a bit windy out there but the view’s much better.”

“Oh, Let’s sit on the wing!” she said with glee, playing along with my silliness.

And in a sense, we did sit there.  For isn’t it the wings that lift you soaring into the clouds? Without them, a plane would never leave the ground. Likewise, without joy, we are inexorably left with the heaviness of our own sorrows like that bitter woman. Some folks can find joy under a dusty rock. Others wouldn’t know it if you dumped it in their lap but my new friend, Elaine?  She carries it with her wherever she goes.