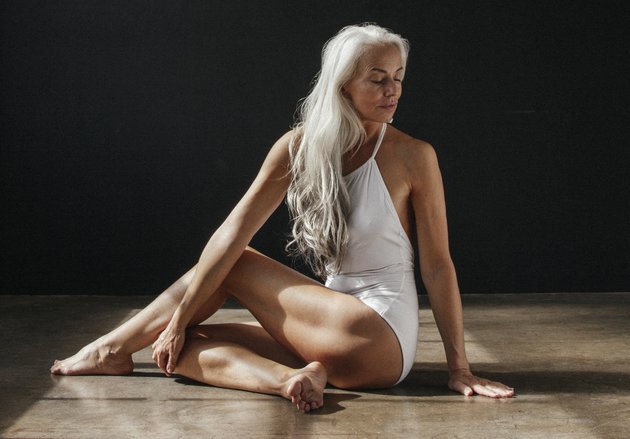 A girlfriend of mine just sent this picture to me with the caption: “When I see her, I think of you!” Whoa there. Me? Okay, I do, in fact, wear a bathing suit everyday. I do have long hair, (although it’s not quite that white yet) but I look at it and see a woman whom I might like to look like someday, you know, when I am HER age. Here’s the problem: I am already older than the Italian model pictured above!! Isn’t perception a funny thing? Psychologists say that we have a good sense of who we are by the age of six. Apparently, for some of us that view never really shifts!

Einstein taught us that if you remain still, time moves rapidly forward. However, if you travel at the speed of light, time, in fact, does not move at all. Thus, if you stay fixed and unmoving, the minutes just tick on. Today, The New York Times published the results of a study, which correlated movement with happiness. Researchers found that people who moved more frequently–even simple walking–reported greater satisfaction and joy than those who spent most of their time in a chair.

That’s why it’s important to keep yourself, ‘out there’ meeting new people, trying new things and avoiding stolid routines. If you’re just counting out your pills while sitting in your easy chair, you’ll get stale. Worse, your optimism may morph into depression. Recently, I saw a great cartoon that depicts a guy falling from a 20-story building. At each floor, he yells out, “So far, so good!” Now that’s a great way to live until we’re on that one-way train to infinity with no return ticket.

When I see friends that I knew 10 or even 50 years ago, they really do seem the same. Delusional? Maybe, but if you look at others from the inside out they don’t really change much. They are who they were. Mostly they are who you remember them as.  So if my girlfriend, whom I haven’t seen in 10 years sees this picture and thinks of me…I say RIGHT ON!! Perhaps I’ve been travelling the speed of light and didn’t even know it!