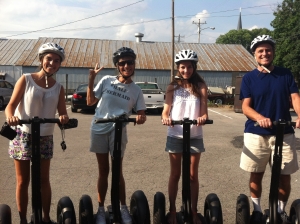 When Julius Caesar crossed the Rubicon, war broke out. When I crossed mine, I merely landed flat on my back, upside down under a clump of trees. The Segway I had been riding just a few seconds earlier continued motoring backwards, back down the hill, off the side of the road and only stopped because it was hopelessly ensnarled in bushes.

I laid still for a moment, just long enough to realize two things: I was not hurt and the mosquitoes found my bare legs and arms irresistibly delicious. Just as I realized the latter, my husband began yelling, “Don’t move! Stay right there!” No way. I gathered myself upright, madly brushed leaves, twigs and bugs away and grinned. “Don’t worry,” I assured him. “Nothing’s broken. I fell really, really well.”

In fact, during the 4 seconds or so that I knew for certain that I was going to fall, I aimed for the dirt, heaved myself off backwards and to the right, while shoving the 100 lb machine away from me and to the left. And, when I hit the ground, I rolled to absorb the impact, just like they taught me in skydiving school 40 years ago!! Boy, was I proud of myself.

The Segway tour had been my idea. What better way to keep up with two teenagers than to have equal horsepower? Our guide had given us a brief lesson on how to ride the machines before we started. “Lean forward to go forward and lean gently back to stop.” The idea was to stay balanced so that you never had to come to a complete stop. Seemed easy enough and at first it was. We whipped around corners, sped down sidewalks, across streets, and giddily waved at passersby. Then we hit the park. The paths began to turn sharply and I lost a bit of steam and fell behind. Then came that long, steep hill.

Now I often advise my aging boomers to, “try something new,” “get out of your comfort zone,” and “stay active.” But after this week’s experience, let me add this: “If you’re gonna fall–aim for something soft,” “When you hit–roll” and “When it’s over–be grateful if nothing is broken.”

P. S. While researching Segways for this blog, I learned that I am not the only one to have taken a tumble.  Presidents Obama and Bush have both fallen, and the owner of Segway was killed a few years ago when the one he was riding plummeted off of a cliff.

One thought on “FALL WELL”