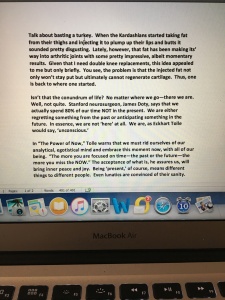 Talk about basting a turkey. When the Kardashians started taking fat from their thighs and injecting it to plump up their lips and butts it sounded pretty disgusting. Lately, however, that fat has been making its’ way into arthritic joints with some pretty impressive, albeit momentary results. Given that I need double knee replacements, this idea appealed to me but only briefly. You see, the problem is that the injected fat not only won’t stay put but ultimately cannot regenerate cartilage. Thus, one is back to where one started.

Isn’t that the conundrum of life? No matter where we go—there we are. Well, not quite. Stanford neurosurgeon, James Doty, says that we actually spend 80% of our time NOT in the present. We are either regretting something from the past or anticipating something in the future. In essence, we are not ‘here’ at all. We are, as Eckhart Tolle would say, ‘unconscious.’

In “The Power of Now,” Tolle warns that we must rid ourselves of our analytical, egotistical mind and embrace this moment now, with all of our being. “The more you are focused on time—the past or the future—the more you miss the NOW.” The acceptance of what is, he assures us, will bring inner peace and joy. Being ‘present,’ of course, means different things to different people. Even lunatics are convinced of their sanity.

In 1990, my grandmother, deep in the throes of Alzheimer’s, was certain that, “Teddy Roosevelt is president!” Currently, dementia claims the lives of 1 in 3 seniors. So, dear readers, since we are all at risk, let’s be watchful of each other! Mood changes are one of the first signs of mental instability in a loved one. Later, aspects of one’s personality often amplify; a bossy person becomes downright authoritarian or a shy person withdraws completely.

A few months ago, noted biologist, David Goodall, ended his life legally in Switzerland at the age of 104. He was of sound mind and in good health but could no longer do the things that brought him joy. While he lived very in the moment (even singing to the press the day before his death), his own ‘now’ had become dark and empty. Thus, while mine is still joyful, I shall focus on these words as I wish you a warm and very ‘present’ Thanksgiving. Trusting that you will let me know should my syntax start slipping.